In 2019, Nightfall Farm and Plumer & Bowers Farmstead collaborated with Indiana University Sustainable Food Systems Science researchers on a statewide survey of Indiana meat farmers to learn more about how their processing experiences influence their farm business.

Eighty meat farmers in Indiana responded to an online survey about their experiences with slaughter, processing, and butchering services for their livestock and poultry. For nearly half of respondents (45%), meat sales provide the majority of their farm income. These farms are distinctive for finishing and selling meat themselves, directly to consumers (63% of respondents) and/or to wholesale buyers (24%), and most respondents have diversified enterprises on their farms, raising more than one type of animal (51%). Nearly every respondent (88%) lists slaughter and processing as a barrier to further expanding their farm business, and most respondents list it as a moderate or extreme barrier (68%). 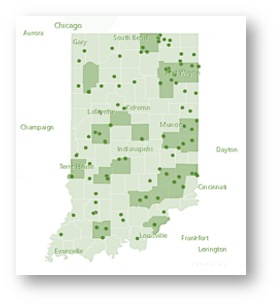 Who Answered the Survey

These farms raised and butchered collectively more than 180,000 animals in 2018, using all regulatory and market channels including on-farm processing, BOAH limited permit, custom exempt, state inspected, and federally inspected for meat, poultry, and rabbit. The majority of respondents raised beef cattle for sale (61%) followed by swine (36%), meat chickens (30%), and lamb (18%). 40 out of 78 raised more than one type of animal (51%), and 45% indicate that sales of meat comprise the majority of their farm income. 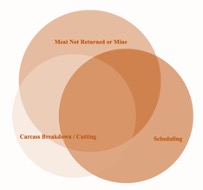 More than 70% of respondents pass by processors closer to home to get better service. When asked about factors contributing to their decision to seek out a new processor, farmers ranked proximity to farm and cost as less important than factors such as ease of scheduling and assurance that a processor is returning all of the farmer’s meat and/or that the meat returned is from their animals (see venn diagram). One farmer describes their experience, “I’m not sure we got our beef back, and our hanging weights were below 50%. I advertise as grass-fed, grass-finished, so it’s worrisome if the meat might not be mine and I’m not getting it all back. It affects my farm reputation and my bottom line.” The critical issue for this farmer, and many others, is timing. “We could sell more if we could get in quicker.”

Scheduling is important. 67% of farmers have had to seek out a different processor because theirs was booked and could not schedule their animals for slaughter. Farmers reported having to schedule their animals for slaughter an average of 107 days (3½ months) in advance, with the responses ranging from 14 to 365 days. Ideally, farmers would like to book their processor 29 days in advance, according to respondents. One farmer described, “A fellow farmer donated their extra beef processing slot at a new-to-me processor, and the processor gladly accepted the change. At drop-off, the owner took time to speak with me, answer my questions, and make suggestions for future visits.” Stories like this one illustrate the importance of good farmer-processor relationships for successful business collaboration.

A number of factors are important for building trust between farmers and meat processors, including: good treatment of animals, consistent meat quality, knowing meat was from farmer’s animals, following a farmer’s cutting instructions, accuracy of animals’ live and hanging weight numbers, and accurate package labels. 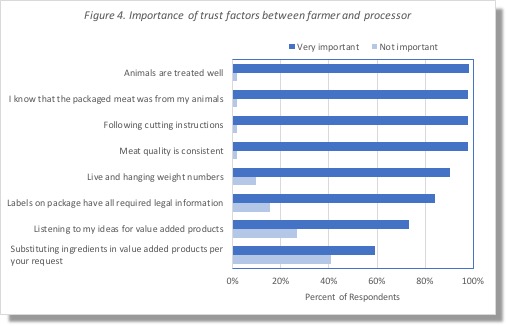 We urge Indiana to follow states such as North Carolina, New York, and Vermont to convene a series of deliberate, focused conversations among farmers, processors, and their regulating agencies to examine and respond to the challenges farms and processors mutually face. Additionally, Indiana’s regulators should explicitly support models underway in other states for solving bottlenecks to processing and other challenges, such as inspected mobile slaughter enterprises. The IFB could also make changes to address the gap in insurance coverage for on-farm vendors to better serve Indiana’s direct marketers and local food supply chains.

The research from this survey focused on small-holder Indiana farmers who sell direct to consumer in their local and regional food markets, and we recommend similar research be conducted among meat processors who work with this scale of farming to better understand the challenges they face in their businesses. Gaining insight into issues such as managing workflows, employees, packaging, storage, etc., and any obstacles processors have to pursuing the Cooperative Interstate Shipment program, could help determine ways to facilitate better relationships with small farms and build stronger markets in the region.

This material is based upon work that is supported by the National Institute of Food and Agriculture, U.S. Department of Agriculture, through the North Central Region SARE program under project number FNC18-1115.